I wanted to write an article in this blog after I left it for a while. This blog is written using GatsbyJS (a Headless-CMS), so I cloned the repo to my computer.

yarn install
. But it doesn’t found yarn or node. I forgot that I was using a different laptop. To avoid similar problem in the future, I decided to make a nix recipe for this repo.

I used Nix for my devops works to pin CLI dependencies, so it can be reproducible. But, I’m not really familiar with Javascript stack, like Webpack, Babel, Yarn, etc. So, I never considered to make a Nix recipe for this.

default.nix
and
shell.nix
file in the root directory of your project. If you have direnv, then you can hook Nix shell. This way, whenever you
cd
into your project directory, your shell automatically switched to
nix-shell
, which will contain your development dependencies.

As of today, Nix has reached version 2.11 which includes experimental support for reproducible build environment called Nix Flakes. You need to enable it first to use it. The usage is quite widespread now. Since Nix Flakes and Nix itself doesn’t tamper each other, generally it is safe to try it out, even if it is labeled “experimental”. The thing about Nix and Nix Flakes is that you can easily rollback if you mess up. Or you can even pin Nix Flakes dependencies. So there is no real risk of making your setup broke.

There is a Nix Flake template provided by NixOS repo. To get it, you can just execute

inputs
and
outputs
. I have my own defaults, so this is what I created initially

nixpkgs-unstable
repo. Despite the scary name
unstable
, in my opinion it was stable in some sense. If you install a package, the source hash will be pinned, so it will always be reproducible.

node
and
yarn
. The usual way is to define
outputs
that produce a development shell. However, recently I noticed that Numtide created another experimental project called devshell. I decided to play around with this.

I will call this Devshell from now on to refer to Numtide’s Devshell config. This is because the original Flake outputs development shell keys are also called

devShell
. I will elaborate it more later.

Anyway. I configured my original flake into:

To explain it bit by bit. I used

flake-utils
input, because originally Nix Flake requires you to define flake for each systems separately. So you can have lists of packages for
x86_64-linux
(normal Linux) and
x86_64-darwin
(intel MacOS) separately.

nodejs
package provided by Nix is already cross-platform configured, I’m using flake-utils to automatically define the same package for both of these systems.

For each system, I defined

devShell
, an output key for Nix flake to make a development shell, previously known as
shell.nix
.

The definition of the

devShell
comes from the utils provided by Numtide’s devshell:
pkgs.devshell.mkShell
. Actually they also provide a way to import the definition using TOML files. But I don’t need that since I want to define it using Nix language.

So this is the bare minimum. To test it, run

nix develop
on the directory. If you are inside a git repo, make sure to git add the
flake.nix
, because nix flake only process changes that is already been added. 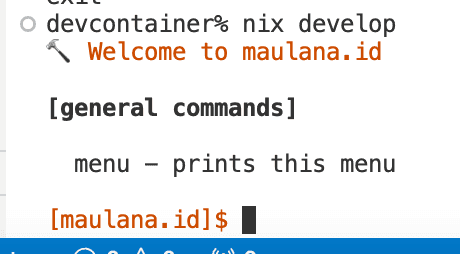 Obviously our own core problem is to have

node
and
yarn
installed. We modify the flake to include these two packages. (I only show the related attribute set)

nix develop
again, I will have
node
and
yarn
executables. However, devshell README.md page recommends us to declare the CLI in the
commands
keys. So we change it again like this.

This has the same effect, but when you enter the shell, it will lists all the available commands. Very neat, I must say.

After getting node and yarn, I ran

yarn install
to install my node modules. Then I run
yarn develop
, but yarn crashed.

Oops, what did I do wrong?

I see a significant error message:

Seems like an openssl thing, based on the error format. A quick google proved me right. I then found this stackoverflow link.

Basically it says that node can’t work with the recent openssl. It suggests to add a

The error is gone. But I got another error when running

yarn develop
. For some reason Webpack/Babel unable to generate my
gatsby-plugin-postcss
output.

I’m super noob in Javascript, so I could not debug it further. I am feeling sad because I originally intend to write an article… But why I’m stuck in this rabbit hole???

I remembered that my site worked when I am using Node v14. So, I decided to change node version. It’s quite easy with Nix. Especially when the nixpkgs repo already prepare a package definition for Node v14 themselves.

Using the new Nix flake based command, I searched the package:

Apparently, the package name is

Rebuilding the flake, and I can see the version is indeed 14, using

But Gatsby still produce the same error… What else were wrong?

After thinking about it a little. I remembered that

yarn
was supposed to wrap
node
. So it is possible that the
node
used in my shell and the
node
used internally by
yarn
is different. After all, with Nix, that is exactly the idiomatic and suggested way to have complete independent package description.

To test the idea, I run

yarn node --version
. It outputs a version 18. So, the node version is indeed different.

We have arrived to the main focus and the meat of this article.

To fix this, we have to tell Nix yarn package to use Nix node package of version 14.

I go to https://search.nixos.org and searching for yarn. The URL looks like this:

There is a source button, and I click that, and it will redirect me to the Nix recipe in GitHub: https://github.com/NixOS/nixpkgs/blob/nixos-unstable/pkgs/development/tools/yarn/default.nix#L25

nodejs
. So basically it is possible to override this attribute. We are going to provide nodejs version 14 for yarn.

After rebuilding the flake,

But we hit another problem now.

NODE_OPTIONS=--openssl-legacy-provider
options doesn’t exists yet in Node 14. Node is complaining.

Then it occured to me, can we just use OpenSSL v1 instead of OpenSSL v3 (the new one) for node 14?

So we override the attribute again. Repeating the same process, I can see that

My final override for

I also used the same method for the

Since both were supposed to use the same nodejs version, I define a new variable to avoid mistake on having to change it in just one place in the future. Basically, we will use DRY principle.

Since my Nix setup already includes

direnv
and
nix-direnv
, I can connect
direnv
so that whenever I
cd
into my project root, the shell automatically uses nix shell declaration I defined in the flake.

I created a file called

.envrc
in the root dir of my project. The content is just:

This will make direnv look for

flake.nix
and activates it whenever my shell is inside the directory.

You can test it out if you have Nix Flake enabled

Things that made Nix Flake very compelling is that you can use the same flake shared by others.

In this example, I made a Nix flake to describe devShell. I shared it in my github repo. Since it is publicly available, you can test it out.

cd
into an empty directory, for example
/tmp/test
. From there, you can activate the same shell I used in this example.

The syntax is fairly straightforward.

nix develop
is the name of the command to enter the development shell. Then
github:lucernae/maulana.id
is the URI that tells us where the flake is.

Yes that’s right, it can be from a filesystem, https URL, or special URI like github (because it is very common for people to store their flakes in GitHub).

These will be stories for another day.

After a little bit of roundtrip, we finally able to provide a devshell using Nix, Devshell, and Direnv.

I believe the journey and stories to get here is probably useful for new tinkerer when trying out Nix.

I didn’t dive in further to pin the node dependencies. I’m not familiar with node js, so this is suffice.

I also proceed to do what I wanted to do earlier, which is writing a new article…

But perhaps after this one article :D