This is a very humbling experience when I first understands it. I want to record it in my blog as self notes.

I was trying to make a VS Code devcontainer. To my surprise, there are so little work on making this happens. I needed it to wrap some functionality of docker containers. I want my colleague to have the same developer experience and easy-to-setup tooling. Unfortunately, asking them to learn Nix seems to be a huge barrier. So I thought if I wrap it as docker container (things they already been familiar with), it would be smoother.

So I started by packaging Nix inside the docker image. However when I let vscode to build the devcontainers, I began to see various issue. At runtime, vscode tries to install some core things. One of the core problem is that vscode uses their own version of node (which can change as new vscode release out). Nix can install node, but usually it patches binaries by linking dynamic lib in Nix store. Vscode’s node can’t see them. Also, I can’t force vscode to use Nix’s nodejs.

The article will be structured as quick guide and step-by-step troubleshooting, to understand how the binaries works.

To skip the reasoning part, jump to the summary

Checking the existence of the binary interpreter

When the devcontainer failed to start, the error is bizarre and totally unrelated with the core problem. Fortunately, since I knew I was doing something that most people wouldn’t have done before, I can guess where the problem lies.

VSC (Visual Studio Code), only shows error log of the creation of devcontainer. From there, I can see the last command it tries to execute and what the exit value is. The exit value doesn’t help. So what I did is to restart the devcontainer manually, and run the command directly.

/home/vscode/.vscode-remote-machine/<some-hash>/node
. The exact path might be different because I didn’t record it.

When I execute the command, it exits with an stderr saying “No such file found”.

It’s bizarre because the file is there. The binary exists. So “what exactly” that the kernel can’t find?

My first guess would be to check using

ldd
. How do I guess this? Mostly because of my past experience working with C++ (although just as a laymen). If I have no experience about this, I think I will search it via google or something. Since the devcontainer probably empty from any build inputs, I need to get
ldd
. Fortunately, I installed Nix inside the container. So, I can just use nix-shell:

Make sure that you are inspecting the

node
binary in the directory, and not
node
from your environment PATH. It looks like this:

It seems it can’t find

libstdc++.so.6
. I’m just curious on why only libstdc++ is missing. That means, it is not included in the Nix path.

Next task would be to find the lib in the nix store.

From there, I could see the package name (gcc). Unfortunately, I could not find the recipe. Makes sense, since this is just a toolchain, so it is possible that it is only being used in the build phase, and not part of the output.

Resorting back to googling things, I then found out that the package name was

stdenv.cc.cc.lib
. From this I could patch the container creation at build time (you know, when running
docker build
), so that I can include the lib in the image.

Now the next question would be, how to let this node binary know that the lib exists at Nix store? If I read Nix manual, it seems there is a hook called

autoPatchelf
hook that takes care of this thing, if the binaries are built using Nix. We can’t do that for this vscode nodejs.

So our next option is to declare

LD_LIBRARY_PATH
environment variable, and then put the nix store path there. But this has risks of ruining NixOS rebuild switch, since the linking path supposed to be changed at runtime.

I’m taking a compromise at that stage to declare this env variable as docker/compose variable (because vscode need it presents without hitting entrypoint). For the NixOS devcontainer, we need to reset this env variable to not let them interfere with the execution.

Set the variable, then check with ldd again

The output will show that it found the library.

However, when I execute

./node
it still saying
bash: ./node: No such file or directory
. Even though
ldd
says that all libraries has been found.

I just realized how stupid I am after pondering that the ldd program I used is the one installed by Nix. So, of course it can found the interpreter. That means, my next attempt would be to place a symlink of the interpreter in the location that node expects it to be.

The interpreter path is (from the screenshot), is the last line:

To quickly check it, I just make a symlink of the nix store path (the right-side path) to the location that the binaries expects (the left-side path).

Here’s the final screenshot of a working link:

Patching the ELF header of the binary

Once we figured out the problem, it’s just a matter of choosing how to fix it. Since devcontainer at the moment expects that everything already been set up by the image (no hook to attach before vscode does its magic). Then at the image creation, I have to patch those things. I prefer to patch it using Nix itself, instead of doing manual bash work like that.

This solution works if the devcontainer we are creating is a plain Nix package manager on top of a minimal distro image. Or perhaps distro-less can work too.

However my end goal is to have a devcontainer that can build and switch NixOS configuration. For this to work, I was thinking of patching vscode node’s binaries, in addition to having the original symlink ready at creation time.

So basically the first approach only works when the devcontainer is first created, but the symlink will be gone under

nixos-rebuild switch
operation at runtime. If the symlink is gone, then when the devcontainer/codespace restarts, it would not be able to run node again.

I still haven’t decided what the proper solution is. But the hacky way is to add NixOS activation scripts and redo the symlink. However my ideal solution for NixOS devcontainer is to have it patch ANY vscode node binaries located in

/home/vscode/.vscode-server/bin
, since over time it is possible that vscode installs multiple node version. Or the classice “it works on my machine, but not yours” all over again, simply because both your colleague and you are not using the same vscode version.

It is critical to understand how patchelf works. So I read a little bit about it.

An ELF, (not to be confused with a certain gorgeous fantasy race), is format for an executable binaries. A system (or computers) might use different architecture, such as x86_64 (standard Intel/AMD processors) or Aarch64 (like raspberry pi, M1 mac, or android phone). Thus an ELF header of a binary helps the kernel figure out what kind of binary it is. So you can’t run x86_64 binary in an aarch64 or the other way around without some kind of emulation triggered by the kernel. The kernel knows this by reading the ELF header.

Let’s say your host system is x86_64 and it reads ELF header of a binary. The header says that the program is an aarch64 program. If incidentally the host already has aarch64 interpreter registered, then it will use that to run the program. An example of how this works is how

Now, what I refer as

patchelf
in Nix is how they uses
patchelf
utility to literally patch the ELF header so it points to the correct path of the interpreter.

In the previous example we linked

To play around with this concept, we can install

To read the ELF header, you uses 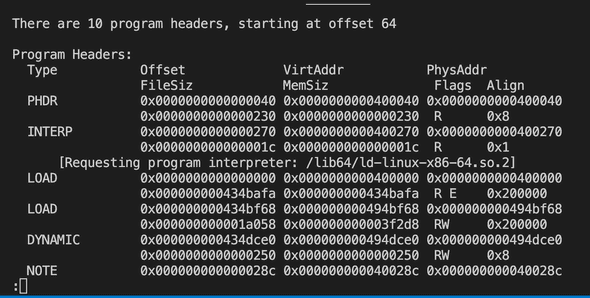 Now, if you want to patch the interpreter path, you use patchelf:

Checking the existence of RPath

RPath or runtime-path in my understanding is the LD_LIBRARY_PATH information embedded in the binary itself. In the screenshot above, in the dynamic section, there is no rpath being set. The dynamic libraries are loaded by name. In NixOS, we can set the rpath so that it points to the profile symlink’s path. In Nix-built libraries, the rpath is set to the nix store path of the libraries used at the time of the build.

Rpath is the reason why Nix-built binaries will not conflict each other. Even though it uses a different version of the same library name.

Here’s an example of how rpath looks like for node binary built by Nix:

Patching the Rpath of the binary

Similar with previous steps, you do:

Where to go from here

Learning all the bits and pieces works together is really interesting. Making devcontainer-nix helped me understands deeper into the architecture layer.

Anyway, my work in progress is in github: lucernae/devcontainer-nix. It’s not the prettiest repo in the world, but I’m planning to use it for my own hobby project for now. At least, it’s working in both GitHub codespace and local VSCode.

Things I learned from this allows me to understand why I can’t SSH-attach my vscode to my NixOS in my raspberry pi. It’s because the node binary installed by VSC can’t link to the interpreter. It’s difficult to debug the issue back then because my Pi is headless, and VSC logs doesn’t tell much. It is easier when it is a container (you can attach directly using docker to check around).

When a binary doesn’t work: