Continuation of Part 1, we are going to revise the architecture a bit.

I made the draft article in February, at that time, the approach didn’t work because object upload always fails in the middle for big files. But, for the recent MinIO version, this is now works.

Previously, overlay mounts doesn’t work. So, the simple solution is to just separate the minio instance and let each one of them holds a group of buckets. Since we are able to run MinIO bucket with Longhorn storage just fine, we are going to focus again on the MinIO instance with CIFS storage backend. 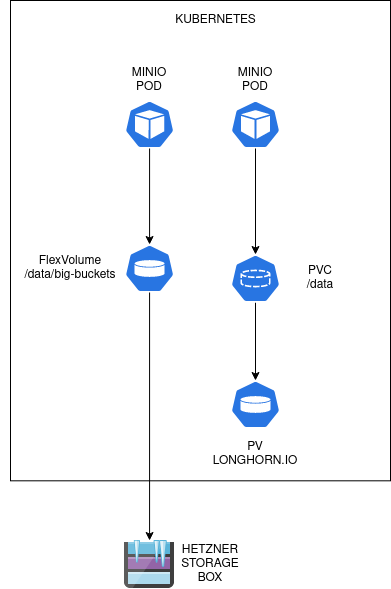 The difference is just there will be two pods or deployment. The first one just mounts the regular PVC, the other one is a pod of MinIO that only served the flex volume. Since access was done via HTTP URL and routing were managed by Ingress, as long as the buckets are separated, I don’t see anything’s wrong with that.

I installed another MinIO charts that is dedicated to serve this CIFS share. To make things more organized, this time we are declaring PV and PVC beforehand, and then let the charts use existing claim.

We already defined the

cifs-secret
resource in the previous article. Now, we define a PV that mounts from the CIFS share, using the flexVolume.

Then in the helm charts, I arrange that the volume used by minio is using this

It runs nicely, but then we need to check the performance. To test it, I send backup from longhorn with big volumes, because sending small files from the web interface doesn’t put much strain on it. Back in february, this setup doesn’t work. I check it again and upgrading the MinIO docker image. Now it works!

Keep in mind, that even though it works, it relies on node volume plugin. One of the drawback from this approach is that you have to install the flex volume plugin (fstab/cifs) manually to each and every node. This can be troublesome because your setup is not resilient to disruption since you have to target the node that runs your MinIO instance. We already have network mounted FS backend via CIFS, so it will be nice if we can mount the FS regardless of where the node is.

We are going to try to tackle this by using a CSI (Container Storage Interface) plugin from OpenShift for Samba, called CSI Driver SMB. CIFS is using a similar protocol with Samba, so if we are lucky, the plugin might work.

We are going to try this in the next article, the part 3